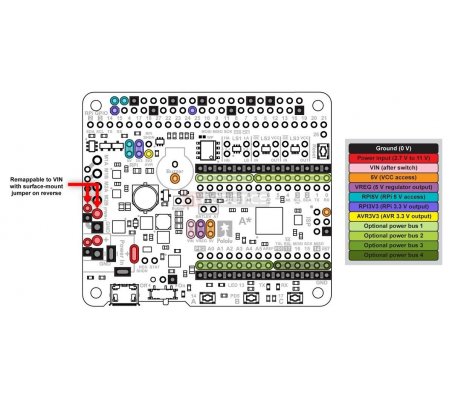 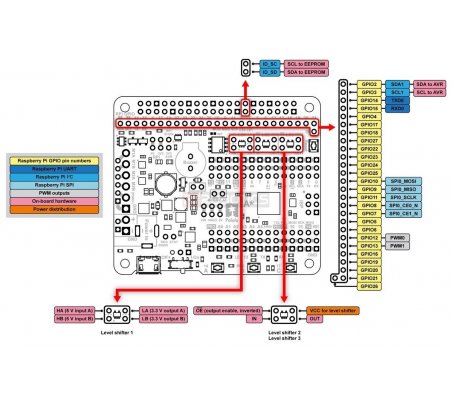 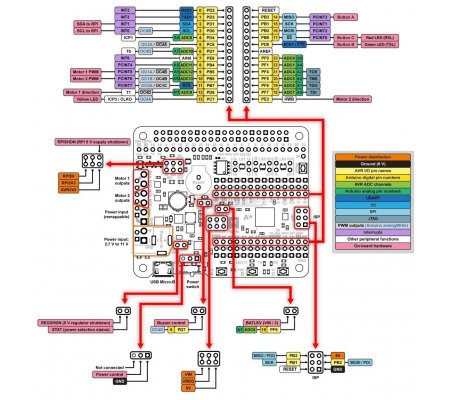 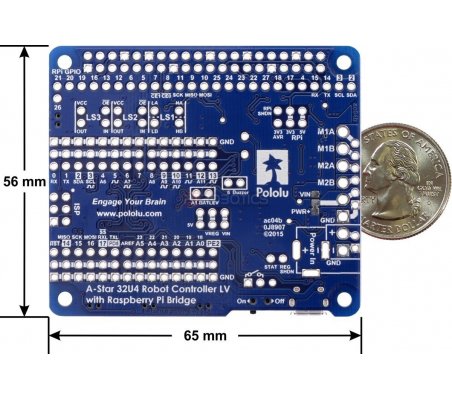 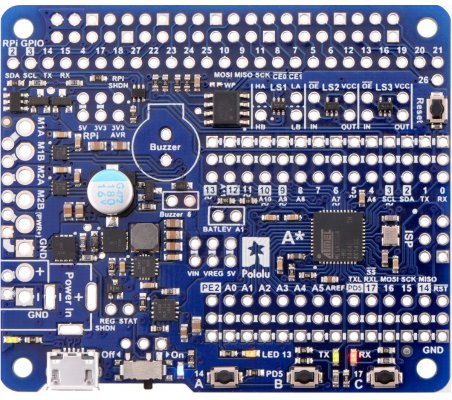 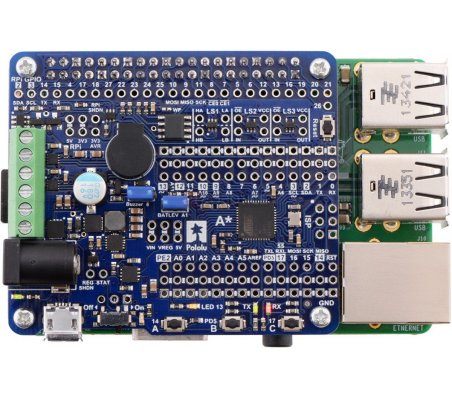 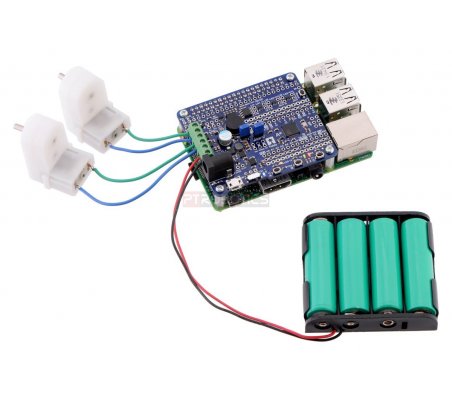 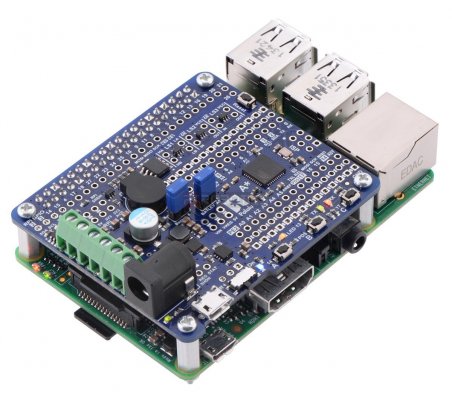 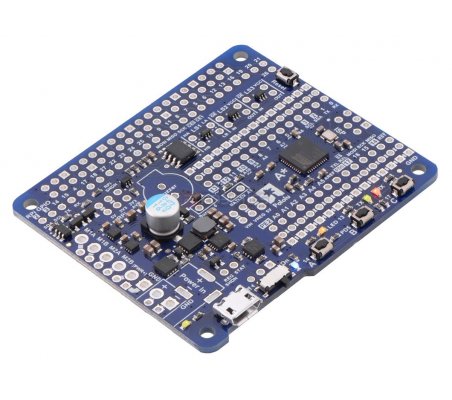 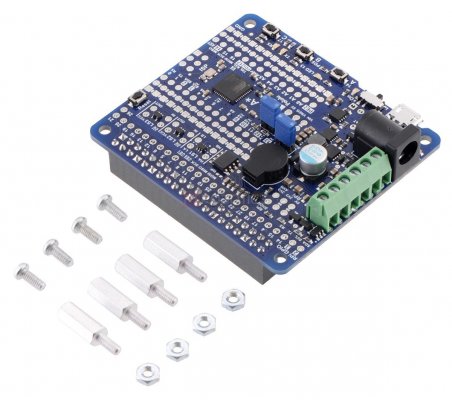 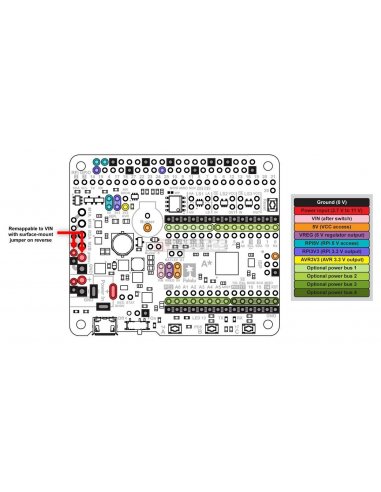 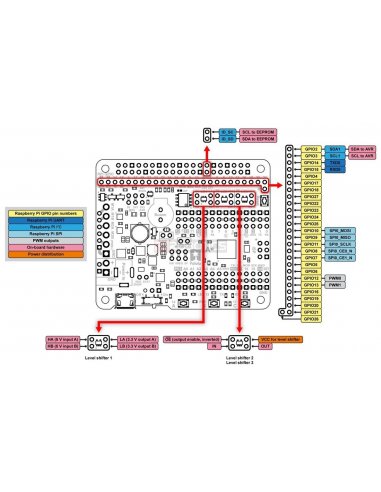 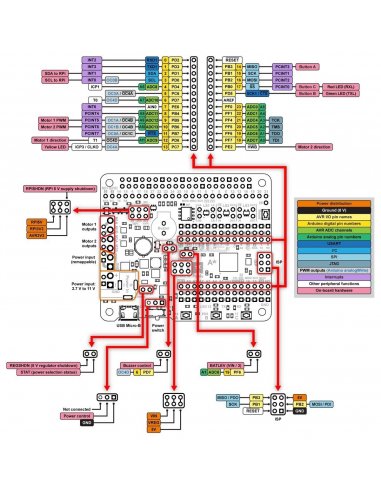 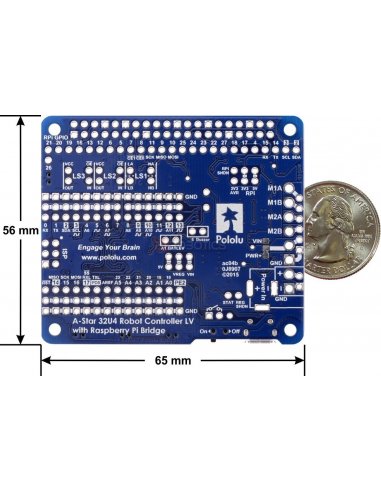 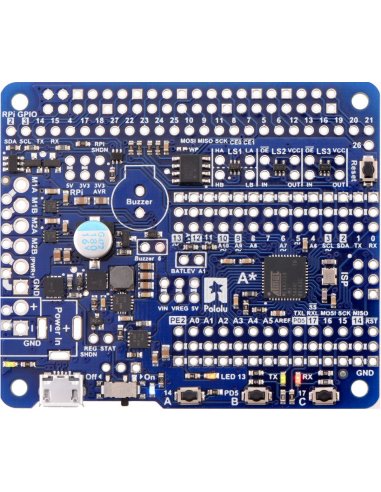 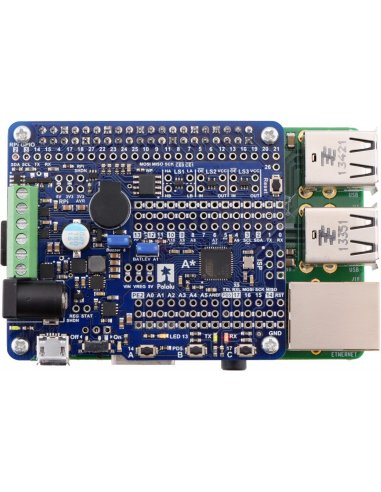 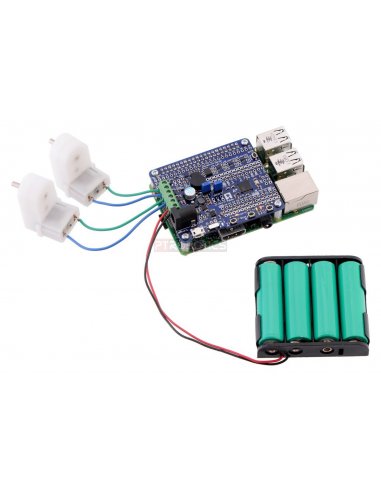 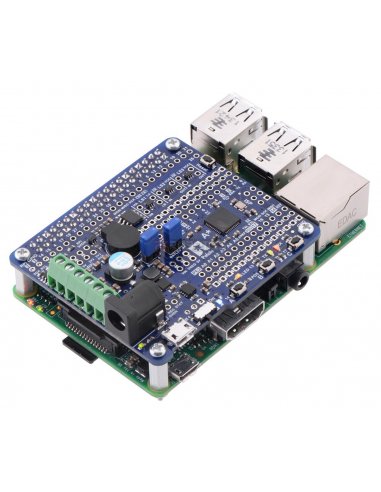 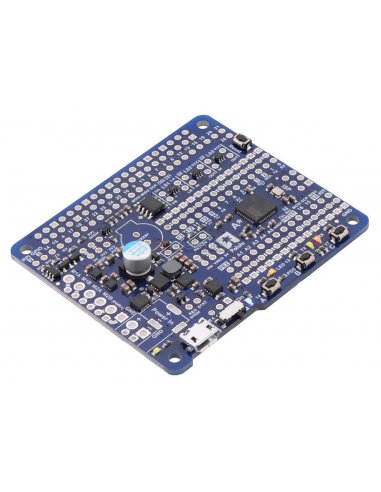 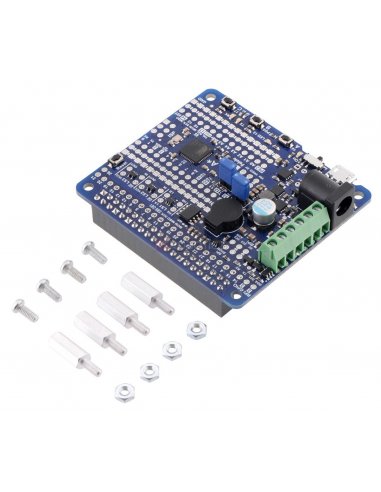 This programmable module combines with a Raspberry Pi to serve as the control center of a small robot or electronics project. Its Atmel ATmega32U4 microcontroller comes preloaded with an Arduino-compatible bootloader, and the board includes dual motor drivers that can deliver 1.8 A per channel to two brushed DC motors.

This programmable module combines with a Raspberry Pi to serve as the control center of a small robot or electronics project. Its Atmel ATmega32U4 microcontroller comes preloaded with an Arduino-compatible bootloader, and the board includes dual motor drivers that can deliver 1.8 A per channel to two brushed DC motors. An efficient voltage regulator and level shifters enable it to power and communicate with a Raspberry Pi. This version (item #3117) is assembled with selected through-hole connectors and components installed for use as a Raspberry Pi add-on.

The A-Star 32U4 Robot Controller LV with Raspberry Pi Bridge is a programmable module well-suited for robotics applications, designed to work either as an auxiliary controller mounted to a Raspberry Pi or as a standalone control solution for a small robot. This A-Star (abbreviated A*) is based on Atmel’s ATmega32U4 AVR microcontroller, which has built-in USB functionality, and it ships with a preloaded Arduino-compatible bootloader. Its complement of peripheral hardware includes dual motor drivers capable of delivering a continuous 1.8 A per channel, along with pushbuttons, LEDs, and an optional buzzer for building a user interface. An efficient switching voltage regulator allows the controller to work over a wide range of input voltages (2.7 V to 11 V).

The robot controller board conforms to the Raspberry Pi HAT specification, allowing it to be used as an add-on for a Raspberry Pi with a 40-pin GPIO header (Model B+, Model A+, and Pi 2 Model B). On-board level shifters make it easy to set up I²C communication and interface other signals between the two controllers, and the A-Star automatically supplies 5 V power to an attached Raspberry Pi. In this setup, the Raspberry Pi can handle the high-level robot control while relying on the A-Star for low-level tasks like reading analog sensors and controlling timing-sensitive devices (e.g. servos).

The robot controller is available in two configurations:

This version of the A-Star 32U4 Robot Controller LV with Raspberry Pi Bridge is assembled with selected through-hole connectors and components for use as a Raspberry Pi expansion board, as shown in the picture above. A 2×20-pin 0.1″ female header is preinstalled to serve as a Raspberry Pi GPIO connector, and a 6-pin strip of terminal blocks and a DC power jack are mounted for motor and power connections. Abuzzer is also installed, along with two 2×1-pin male headers and shorting blocks for the buzzer and battery level jumpers.

This version ships with a set of four M2.5 standoffs (11 mm length), screws, and nuts that can be used to secure the board to the Raspberry Pi at the proper height for the GPIO connector.

For a version with SMT components only, making it more suitable for standalone use and allowing customization of through-hole components, see item #3116.

Like our other A-Star 32U4 programmable controllers, the A-Star 32U4 Robot Controller ships with a preloaded Arduino-compatible bootloader (which uses 4 KB of flash memory, leaving 28 KB available for the user program). We provide a software add-on that enables the board to be easily programmed from the Arduino environment and an Arduino library to make it easy to use the additional on-board hardware.

The A-Star 32U4 Robot Controller has the same microcontroller as the Arduino Leonardo and Arduino Micro, and it runs at the same frequency, so most code examples intended for those boards should also work on the A-Star.