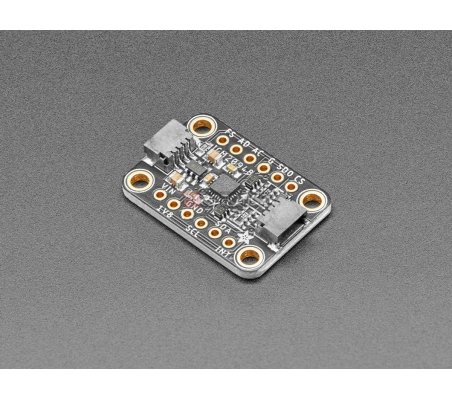 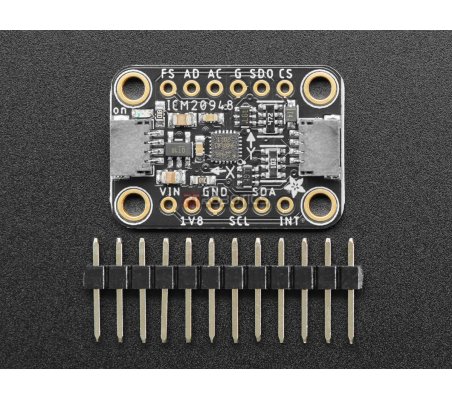 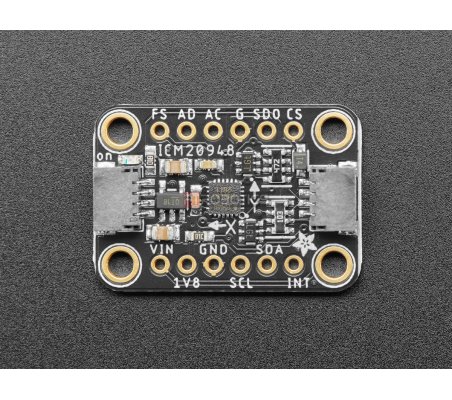 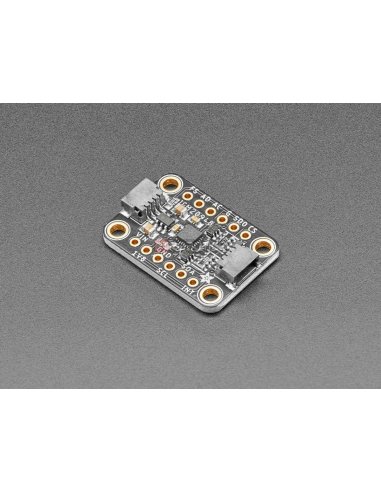 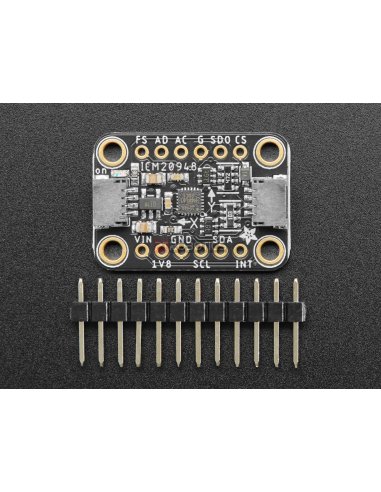 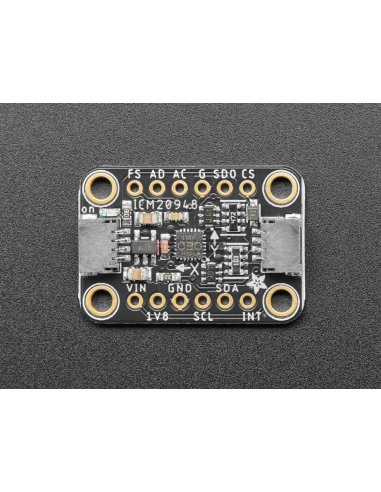 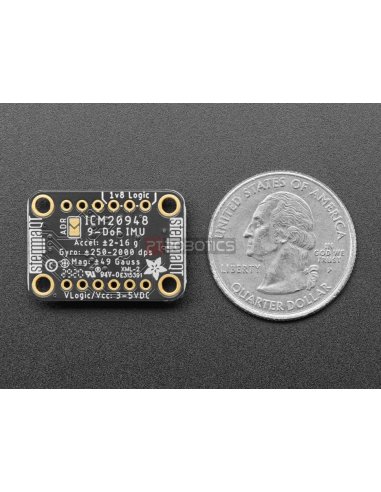 When you want to sense orientation using inertial measurements, you need an Inertial Measurement Unit, and when it comes to IMUs, the more DoFs, the better! The ICM20948 from Invensense packs 9 Degrees of freedom into a teeny package, making it a one-stop-shop for all the DOFs you need! Within its svelte 3x3mm package, there is not just one MEMS sensor die like your common sensors, but two sensor dies! The ICM20948 pair’s Invensense’s MEMS 3-axis accelerometer and gyro with the AK09916 3-axis magnetometer from Asahi Kasei Microdevices Corporation.

This chip is considered TDK's 'upgrade' for the popular (and now discontinued) MPU-9250 - but please note it is not exactly code compatible!

All 9 axes of measurement are made available thanks to a crew of 16-bit Analog to Digital Converters, diligently converting the raw analog signals from the MEMs sensors to digital readings that are accessed via I2C or SPI. Each of the sensors has the quality specs you would expect from such a sensor. Just see what the datasheet has to say:

Now that’s a handy and capable team of sensors, ready to help orient your project in the right direction!

Like any high-performance device, the ICM20948 can a bit particular about how it needs to be worked with. Unlike the pick and place machines that normally handle these sensors, most of us humans can’t readily take a little guy like the ICM20948 and plop it into our circuit; it’s small! What’s more, the ICM20948 runs on 1.8V which is increasingly common for device manufacturers but isn’t hardly common for makers, learners, prototypes, or the like. With that in mind, we’ve put the ICM20948 on a breakout with a 1.8V voltage regulator as well as level shifting circuitry to allow your 3.3V device such as a Feather M4 or Raspberry Pi, or a 5V device such as the Arduino Uno.

To make connections easy, our breakout puts makes the pins of the ICM20948 available on standard 0.100”/ 2.54mm pitch headers for use with a breadboard. Should you wish to avoid soldering, the Stemma QT form factor breakout also includes our Stemma QT connectors which just like the SparkFun Qwiic connectors they’re inspired by (and compatible with). Using these handy connectors you can simply plug in the sensor and get rolling with your project. You can even use them to daisy chain multiple sensors together! QT Cable is not included, but we have a variety in the shop.

Lastly, all the wiring in the world wouldn’t do you much good if you didn’t know how to use those wires to talk to your sensor, so we’ve done the work of writing libraries for Arduino and CircuitPython that will allow you to use the ICM20948 with your favorite development board, be it an Arduino, Feather, Raspberry Pi, or one of the many other Arduino and CircuitPython compatible boards. 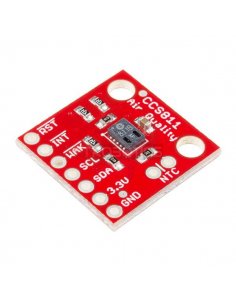 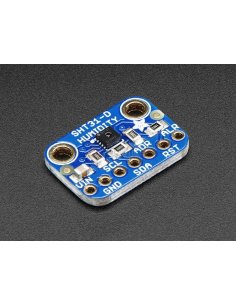 PTR004394
21,96 €
Adafruit Sensiron SHT31-D Temperature & Humidity Sensor Breakout Sensiron Temperature/Humidity sensors are some of the finest & highest-accuracy devices you can get. And, finally we have some that have a true I2C interface for easy reading. The SHT31-D sensor has an excellent ±2% relative humidity and ±0.3°C accuracy for most uses.
Ver
Tap to zoom